What the Headlines About Meghan Markle Say About Us All 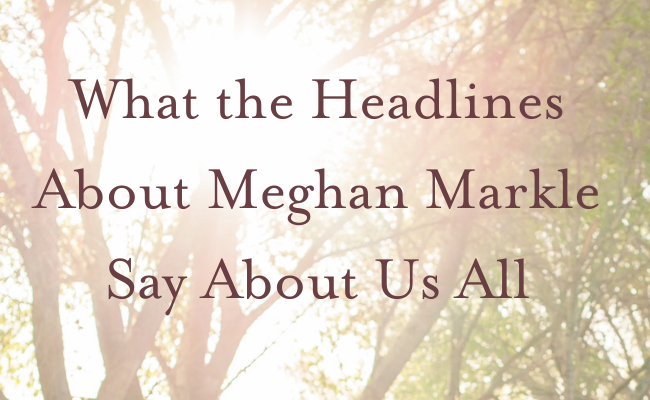 I have an obsession with Meghan Markle (you know, the duchess of Sussex). My friends know this because I talk about her A LOT. And I think about her a little more than a lot.

Is it because she’s gorgeous and smart and talented and an American who married a literal prince?

There is nothing I love more than a good romance, and this is clearly the plot of an awesome romance novel.

But more, it’s because her story – and the way it’s portrayed in the media – tells another story. Or many stories really. It’s the story of race in America and Great Britain, the story of what it’s like to be biracial, the story of hierarchies and who is supposed to succeed in this world.

When I read articles about Meghan Markle, they go a little something like this: If it’s a British source (specifically a tabloid), it’s scathing and all about how rude Meghan is and how she made Kate cry. If it’s from a Black women’s magazine (like Essence), it’s positive and glowing. Mostly the same if it’s from a more traditionally white women’s magazine (like Cosmopolitan). If it’s Fox News, People, Us Weekly, or something similar, it vacillates between writing about Meghan positively and negatively. In fact, you might even find two articles on the same website on the same day, one with a positive title and one with a negative title. (Gotta keep their readers coming back after all!)

And in all of it, I see subtext.

I see a woman who was well liked (albeit mostly unknown) UNTIL she became a princess and did it with impeccable style and grace.

I see a woman who went above her station by being a biracial woman with a BLACK mother who was calm and confident and clearly saw herself as equal to the WHITE British royal family.

I see a woman who is an avowed feminist and has chosen to make her values and decisions about HER life more important than what the public thinks of her.

I know some of you see this. And some of you don’t. And most of you probably haven’t thought about it that much because it’s just celebrity gossip.

But the way we gossip about our celebrities says a lot about who we are, as individuals, as communities, and as nations.

When Kate Middleton became a princess, she was quiet and let Prince William do most of the talking. I watched her first royal speech, and she was adorably (yes, I love her too) nervous. And that worked for us. That fit into our ideas of what a woman should be and how she should act.

Even those of us who want women to stand up and speak out still sometimes fall into old (patriarchal) ways of thinking about women. And Kate Middleton has followed the rules so she gets an A+ in the gossip rags. We all love her. How could we not? She is Cinderella.

Meghan Markle doesn’t follow the rules. (We know that because it’s the title of about every other article about her.) She is a feminist, she is biracial, and yes, she proved she was Black enough when she made sure her wedding reflected her African-American heritage. All of that has earned her a decided C- in the eyes of the public.

There seem to be a lot of people who don’t like Meghan Markle. Some, like Piers Morgan, are only to be expected. He’s a conservative white man. Why would he like a woman who is biracial, a feminist, and now a princess (technically not a princess, a duchess, but you get what I’m saying)? But there are a lot of other people, people like you and me, who read all these headlines about “Duchess Difficult” and have decided they don’t like Meghan, not like that lovely and likable Kate.

But we’ve heard that before, haven’t we? That women should be likable, should defer to their husbands, should sit down and be quiet. And we know that Black women have to work extra hard to be likable lest they be deemed “an angry Black woman.”

So let’s be honest with ourselves when we’re gossiping…or even just reading the gossip headlines at the grocery store. Do we not like Meghan Markle because she’s demanding and thinks too much of herself?

Or do we not like her because she’s a woman who isn’t following the public rules of female decorum?

Or a Black person who isn’t following the public rules of Black decorum?

Or even worse, a Black Woman who dares to believe that she is equal to every other person in the room, regardless of race, gender, or political or royal status?

By the way, I don’t think that the majority of people are outwardly racist and think these things. What I do think is that so many of us subconsciously fall prey to beliefs and stereotypes about women in general and women of color specifically that we make these judgments without being aware of the whole context behind them.

Meghan Markle gets an A+ in my book. So does Kate Middleton. They are two fascinating women who are living in the public eye and they are each doing it their own way. I don’t need them to act the same and I don’t expect – or want – Meghan to “get in line.”

But if you find yourself in line at the grocery store, looking at yet another negative Duchess Difficult headline and thinking how you don’t like her, can you ask yourself this one difficult question?

What subconscious biases might you be holding onto that play into your feelings of dislike?

Does that negative headline really have anything to do with Meghan Markle herself or does it have everything to do with the biases of the person writing the headline, the outlet they’re writing it for, and the social climate that they are a part of?

Because ultimately a headline is just a story that has been spun. And it says much more about the person/people/society spinning the story than it does about the story itself.

Ready to let go of everything holding you back?

Book a FREE 30-minute consultation so you can begin to creating health, happiness, and success in your life.

Let go of everything holding you back.

Feeling overwhelmed? Watch a (free) replay of my workshop: Find Your Joy – Make Your Way Out of Burnout. Come ready for meditation, visualizations, and even some drawing!