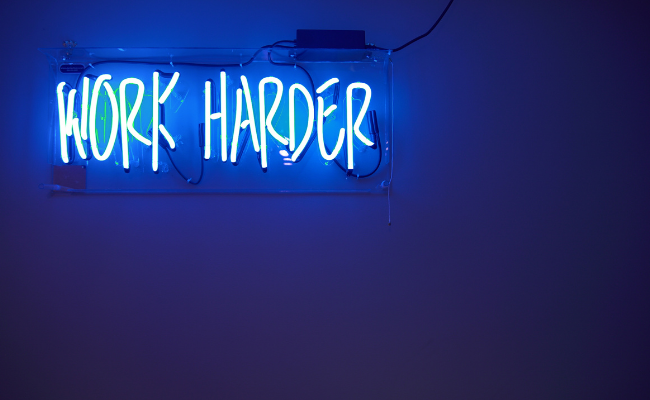 This post may include affiliate links. If you purchase something from a link, I may receive a small commission, which helps to support my work. Thank you!

“I have the best advice for women in business. Get your f*cking ass up and work. It seems like nobody wants to work these days.”

So apparently Kim Kardashian recently gave this advice to women in an interview with Variety, and the internet had something to say about it.

Clearly, there’s some major privilege showing itself if she thinks that her success is 100 percent due to her work ethic.

It’s been said before that success is part hard work, part luck, and in Kim’s case, she’s had a lot of luck in being born and raised in a wealthy celebrity family.

However, the backlash that I saw all took pretty much the same stance: My grandmother worked her whole life to see very little success and she had an amazing work ethic.

True. Women work really hard. Study after study and book after book tell us just how hard women are working these days and how much they’re sacrificing to do that. In fact, the majority of my clients come to me with burnout because they work so hard. One of my clients is chronically ill and disabled and I am always amazed at how much work she gets done in spite of her illness, work that often comes at a further cost to her health.

Yes, I think we all know that women work exceptionally hard, and perhaps it’s the scene Kim surrounds herself with in L.A. that makes her think otherwise (at least that’s what I saw one reporter suggesting). But obviously she’s not hanging out with you or me or the cashier at the local grocery store.

So who knows where she’s coming from.

What intrigues me more is that when someone with privilege makes a blanket statement like, “It seems like nobody wants to work these days,” the response is to boast about how much our mothers and grandmothers worked, to talk about how hard single moms work, and to basically glorify our culture of working to the point of burnout.

I think the response makes the obvious point that we all work extremely hard and very few of us see the success that the Kim Kardashians of the world do because we live in a society that doesn’t actually reward hard work as much as it does certain types of work and certain types of people (mostly rich white people).

But can we take a step back and look beyond the obvious?

I think Kim is right that nobody wants to work anymore. And women definitely don’t. Not the way we have been.

In Overwhelmed: How to Work, Love, and Play When No One Has the Time, Brigid Schulte writes this:

“There is no question that the overwhelm and information overload are fracturing time for both men and women and splintering it into whirling bits of time confetti. But for years, time studies have shown that women’s time is more fragmented than men’s time. Their role overload, juggling work and home, has been greater and their responsibilities and “task density” more intense. What, I wondered, does that mean for a woman’s opportunity to reach this optimal state of flow? And if fewer women spend uninhibited time in this thoughtful, creative, joyful space, the sort of timeless room of one’s own that Virginia Woolf imagined, what is the cost? To themselves and their experience of being alive? To their families? To the world, even, for the ideas or creations that don’t have the time and space to be born?”

What is the story we are telling ourselves as a society if the response to a rich, privileged woman telling other women to get off their asses and work is to simply fight back with how much we do work?

The story is that old Puritan view of work ethic, of pulling yourself up by your bootstraps, and of success being available to anyone no matter who you are or where you start.

But I believe that that story is something we’ve been taught in order to make those who come from privilege feel good about themselves (If I’m so successful, I must have worked hard for it!) and marginalized groups feel like there’s something wrong with them rather than the system (I must not be working hard enough or I would be more successful!).

The result is that we have a culture that glorifies work to the extent that women are suffering physically, emotionally, and spiritually from it.

Tricia Hersey, the founder of The Nap Ministry, writes:

“My rest as a Black woman in America suffering from generational exhaustion and racial trauma always was a political refusal and social justice uprising within my body. I took to rest and naps and slowing down as a way to save my life, resist the systems telling me to do more and most importantly as a remembrance to my Ancestors who had their DreamSpace stolen from them. This is about more than naps. It is not about fluffy pillows, expensive sheets, silk sleep masks or any other external, frivolous, consumerist gimmick. It is about a deep unraveling from white supremacy and capitalism. These two systems are violent and evil. History tells us this and our present living shows this. Rest pushes back and disrupts a system that views human bodies as a tool for production and labor. It is a counter narrative. We know that we are not machines. We are divine.” (By the way, go read the rest of her post here and then read everything else she’s written. It’s a good rabbit hole to go down.)

I know that women work hard. Damn hard. So do you.

But I want to invite you to question the story that tells you that the most important part of this discussion is to prove just how hard women work.

What if that story is simply a tool of oppression and not something that actually supports women or their health?

What if, as a culture, we stopped listening to Kim Kardashian or anyone telling us we’re not working hard enough, and started listening to that voice inside that’s saying, “There’s something wrong with a culture that places all of its value on the productivity of its citizens, and only certain types of productivity at that?”

I think we’re beyond the point where women have to prove that they’re working hard.

We’re so far beyond that.

Now is the time to start questioning the stories you’ve been raised with, the stories that make you feel unproductive if you haven’t checked ALL THE THINGS off your list today, and the stories that make you think there is something wrong with you if all your hard work hasn’t landed you where you want to be (and sometimes even when it has because there’s also a story that tells you you’re never good enough).

There isn’t anything wrong with you. Or your work ethic.

You’re just playing a game that you can’t win and it’s time to start playing a different game. One where your value is inherent, where you prioritize your wellbeing, and where you understand that the society we live in is not designed to support your health.

But you can choose to create a different story for yourself. It’s not easy. But it’s worth it.