Your value is inherent. 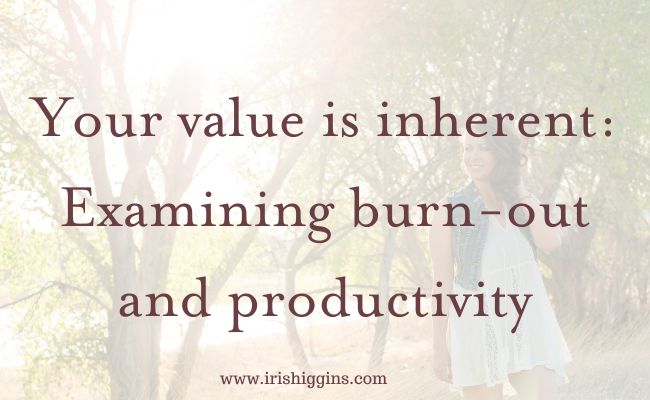 (Short on time? I can read this to you while you multi-task.)

When do you become valuable?

I’ve been asking myself this question lately and wrestling with the somewhat inconclusive answer.

What makes somebody valuable?

Is our value as humans inherent or are we only valuable as a reference to what we bring to others?

I see clients and friends (and myself) struggling with this, and in fact an affirmation I helped a client create recently was: I am valuable to myself.

But what does that mean?

I have clients with chronic illness who are unable to make money easily because they can’t be productive in the way society tells us to. And so they sometimes question or doubt their value.

And of course there are many other marginalized folx who are also told in varied ways that they have less value (including often getting paid less!) than others. They start out with a society that tells them they’re less valuable and also that their value comes from their productivity, ability to make money, and ability to do for others. All of this leads to socially sanctioned burn-out and often chronic pain as well.

You know who else often doubts their value?

Stay at home moms who don’t make the money in the family and whose life is made up of activities that our society doesn’t place much value on. It can be difficult to feel valuable when your partner makes the money and you are line cook, dishwasher, therapist, playmate, doctor, and teacher all in one neat little title (SAHM).

Even the title doesn’t acknowledge anything the job requires.

And guess what? Here’s another group that questions its value, but for a different reason.

High achieving career women who make lots of money gain self-esteem through their career but also question their value. The moms worry they’re not with their kids enough. The employers and managers worry their employees aren’t happy enough. Everyone worries they’re not doing enough even when they’re doing way more than is humanly possible.

For all of these groups, and really for all of us, the question is, am I valuable if and when I am not doing for others? Is that selfish or is that one of the lessons I’ve come here to learn?

That I am in fact inherently valuable?

If I run away to the woods and spend the rest of my days alone, do I still have value? Can I be valuable to myself when I am not actively doing for or thinking of others?

If I take these questions and apply them to my Story Framework, here’s what I come up with… 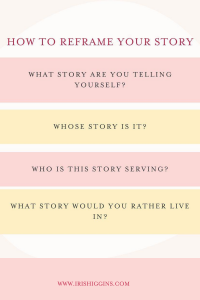 What is the story I’m telling myself? The story is that we are only valuable in reference to other people. That we do not have inherent value and therefore taking care of ourselves first and foremost is selfish.

Whose story is this? I see this story everywhere and in just about every client I work with. It’s the “not enough” story because if your value was inherent, then you would always be enough.

So then where does this story come from? I almost hate to say this because it sounds so cliché right now, but if we look to our culture of capitalism, white supremacy and patriarchy, we can see how this story benefits certain people. And when we know who the story serves, we know whose story it is.

Who is this story serving? Is this story serving me or you or the average person? Well, as someone who works with womxn on a deep level, I would say no. The only thing I see this story doing is pushing us to work beyond our capacity while putting our mental, physical, and emotional needs last.

And I see that in all genders, not just womxn.

The only people I can see benefiting from this story are the people at the top (generally, although not always, rich white cisgender men), the so-called one percent whose system continues to work because they have others convinced that they need to constantly prove their value. That need keeps people in a state of near burn-out, which keeps them from prioritizing their own happiness and wellbeing, which would lead them in a totally different direction if they were to make that a priority rather than making proving their value their top priority.

Okay, so if this story was created by the one percent (you might come up with a different answer, but that’s the answer I got) and benefits them, then what story would you rather live in? (Sidenote: At a spiritual level, does it even really benefit them? I honestly don’t think it does.)

What story would you rather live in?

Don’t even think about whether this story is true or not. Any story can be true depending on how you tell it. Instead ask yourself, is this story benefiting me? If the answer is yes….carry on.

If the answer is no or partially no, if you do find yourself in a state of near constant burn out trying to prove your value, then the next question to ask yourself is: What story would I rather live in?

Again, the idea that your value is based on providing value to others rather than just being inherent is a story. And if it’s just a story, it can be changed.

So what story would you rather live in?

Now, at this point there are generally two responses to this: one, excitement and curiosity at the idea of another story being possible. Two, defeat because what’s the point of exploring another story if you can’t change the society we live in?

So again, ask yourself, what story would you rather live in?

I don’t tell my clients what story I think they should live in. And I don’t think there’s one answer to this question. I think everyone needs to figure out the answer for themselves.

But let’s pretend you have decided to try on this new story: I am valuable simply because I exist.

How can you begin to live in that story when the outside world is still telling a different story?

One, start with an affirmation. Here are some examples:

I am valuable simply because I exist.

I am valuable to myself.

My worth is not dependent on my productivity.

Once you have your affirmation, try this simple breathing exercise:

Focus on the old story and notice how it makes you feel. Notice where you feel that story in your body. Then inhale deeply and as you exhale, say your new affirmation to yourself, and imagine releasing tension in that particular area of your body as you exhale. Every time you exhale and say your affirmation, you are telling your body your new story, You are taking the energy away from that old story and reaffirming yourself with a new, relaxing energy. Do this daily, for as long as you have time for. One minute is fine. Five minutes is fine. An hour is fine. You don’t get more points or become more valuable for doing it longer so simply do what feels good and fits within your lifestyle.

Next, look at your home (or wherever you spend most of your time). How does your home reflect your old story? How can you disrupt that old story and replace it visually with your new story?

If not, can you create one? And let’s be clear: you do not have to have a big home to make this work. You can start small. With one client, we created the idea of making a box that would fit in her closet and in that box she would write down all her affirmations and hopes and dreams. That box was what was safe and available in her current situation but it was something that was just for her. It was something that told her, “I have value outside of my family. My needs are important and my dreams are worthy.”

I know the world may be way behind where you’re ready to go. And that can feel frustrating and disorienting. But nothing is more frustrating than constantly believing YOU are the problem when the reality may in fact be that YOU are fine and it’s OUR SOCIETAL STORIES AND STRUCTURES that are the problem.

Ready to let go of everything holding you back?

Book a FREE 30-minute consultation so you can begin to creating health, happiness, and success in your life.

Let go of everything holding you back.

Feeling overwhelmed? Watch a (free) replay of my workshop: Find Your Joy – Make Your Way Out of Burnout. Come ready for meditation, visualizations, and even some drawing!